Can you imagine viewing artwork in a museum without a glowering security guard staring you down to make sure not too close to the piece? What if you had the ability, day or night, in your car or on foot, to admire public paintings on random sidewalls, in the most extraordinary places? There are treasure troves of murals throughout Southern California that are either part of a modern movement, are of major cultural value, or, have, at the very least, invaluable Instagram potential.

There are many reasons why Jessica Biel is cool. She has made a name for herself in Hollywood, broken many hearts by marrying Justin Timberlake, and has opened the Au Fudge restaurant in West Hollywood. In addition to a fun place for families to eat, a big bonus lies in a mural around the building. Based on the popular Netflix cartoon, this mural by Kelsey Montague is a pastel potpourri with its title character right in the middle of the design. Undoubtedly, it’s highly recommended to take a trip to Au Fudge to simply stare in amazement at the purple flowers, green shading, and sinuous black lines that outline “Luna Petunia.” Afterwards, visitors will be even more appreciative of Biel for commissioning this masterpiece.

A Large Collection of Murals in Old Town Lompoc
www.lompocmurals.com

Since its inception in 1988, the Lompoc Mural Society has made sure to protect its approximately forty murals in a city that is often referred to as “The City of Arts and Flowers.” Each mural has the potential to transfix viewers, making this a well-served day trip to experience. Among the murals are “Feeding Time” by Jeff Raum, which offers a “window” along a wall where a Tyrannosaurus Rex glares with carnivorous intentions at an obliviously prone dinosaur; and, “The Boatmen” by John Pugh, which depicts a ship “breaking” through and out of a wall. But, perhaps the most memorable one is “Monarch Magic” by Oregon artist Colleen Goodwin Chronister, where three kids are standing seemingly in butterfly heaven, gasping in awe at the sweet swarm of the miraculous creatures within reach. On a blistering hot summer day, murals like this one justify being outside!

San Diego is showcasing various murals that serve as reminders of the love of culture and historical significance for many of the Latinos who live here. For example, near the Belching Beaver Brewery in North Park, there is the “Greetings from San Diego” mural by Victor Fung that is warmly welcoming in the way it reflects the city’s ocean vistas, blue skies, and lush scenery. In addition, “Don’t Believe the Hype” by Brazilian duo Os Gémeos, on the south side of the Westfield Horton Plaza, is unique for being rendered vertically along a parking garage wall. It features different individuals standing on top of each other’s shoulders, and succeeds by being minimalistic in a manner that draws rapt attention.

The murals with arguably the most substance are in the Barrio Logan neighborhood, the home of Chicano Park, and where Mexican heritage is paid homage to with discrete collages alluding to The Day of the Dead and the Aztecs, to name a few. The one mural in particular that epitomizes the struggle to get the public artworks recognized by San Diego is “We Saved Our Murals” by Mario Torero. Created in 1997, it is a celebratory piece of art that reflects a resistance which has ultimately triumphed.

A poignant mural, completed last year after four years in the making, is “Among Heroes” by Carlos Aguilar, which can be found on the side of Santa Ana’s La Chiquita Restaurant in the Logan neighborhood. It is a moving work of reverence for the estimated 500,000 Mexican-Americans who participated in World War II. It is comprised of an illuminating and mostly black-and-white design with the faces and names of those who lived to tell the tale, alongside those who tragically perished.

And, until recently, before the city of Irvine mandated that it be removed, one mural that regularly sparked awe from drivers along the 405 North was the one plastered on the Tilly’s Inc. building. The installation, which was spray-painted by Rhode Island School of Design graduate Zio Ziegler, highlighted abstract humanoid figures who were running in motion. Even more impressively, the outlined individuals were filled in with brilliant hues that made up a spectral pattern.

The removal of murals in Orange County is a cause for concern, given that bureaucratic pressure within the region has beset many of the Chicano-themed murals – most of which were painted in the 1970s and 80s, and can still be tracked down at El Patio in Capistrano Beach and on the outside of the Salvation Army Church in Anaheim. Unfortunately, several of them are now being painted over, which is why it’s important for Orange County residents to publicly express their appreciation of them before it’s too late. 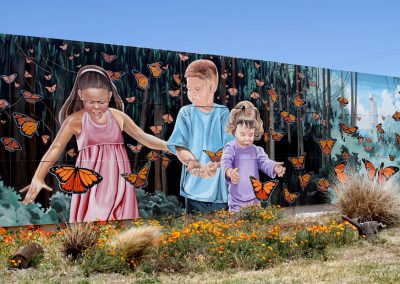 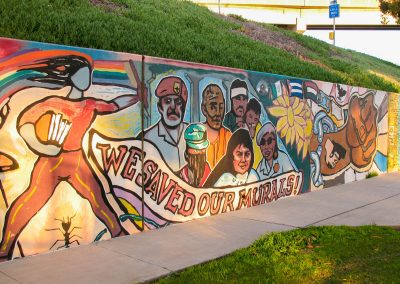 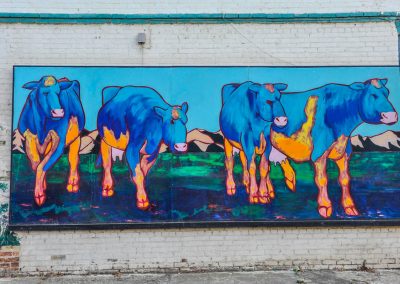 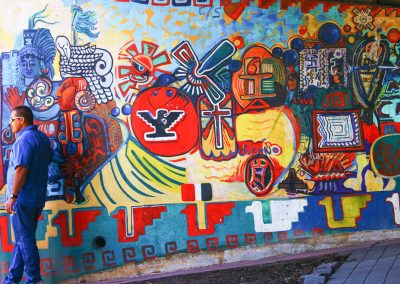 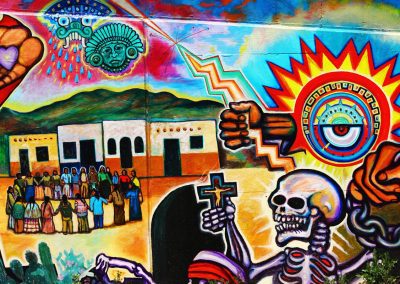 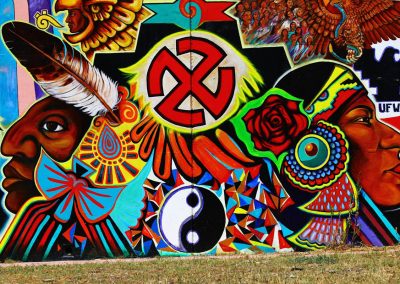 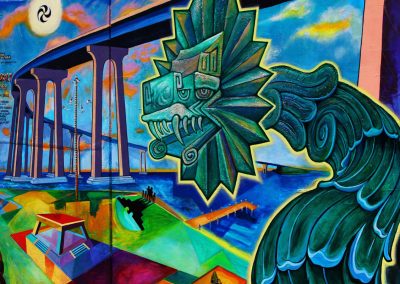 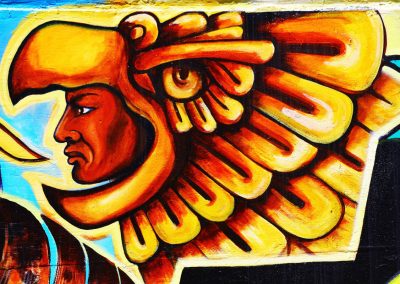 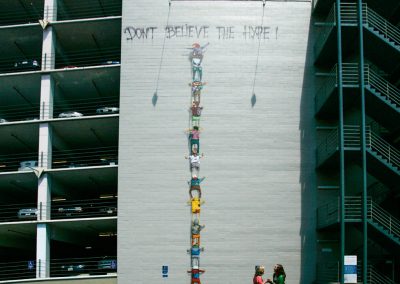 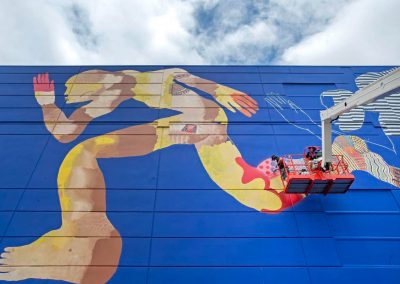 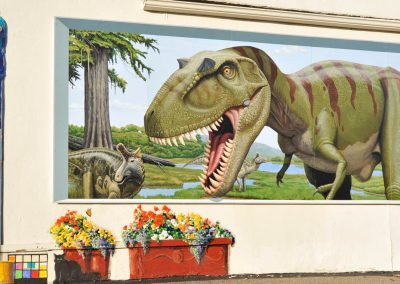 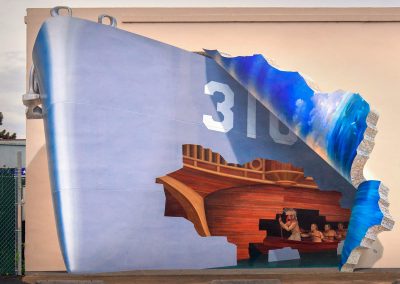 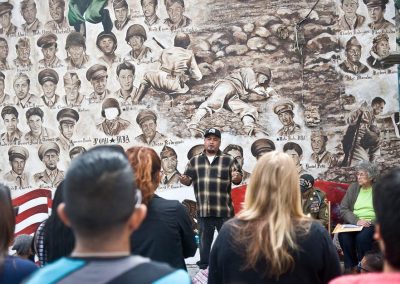 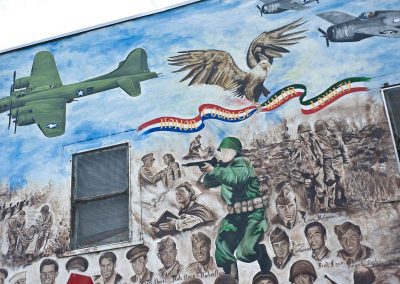 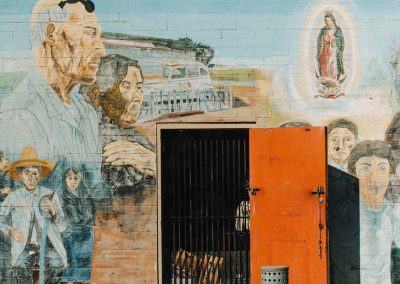 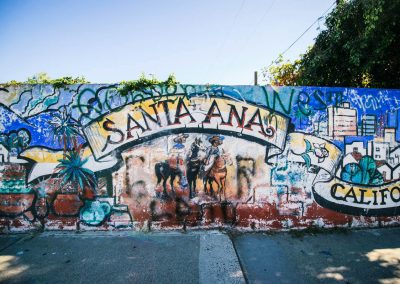 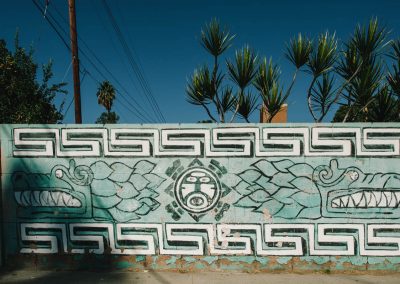 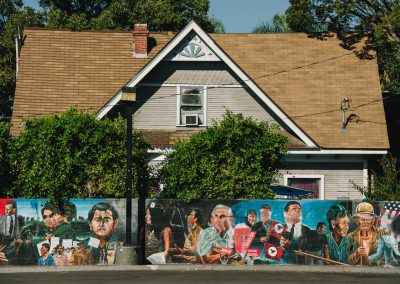 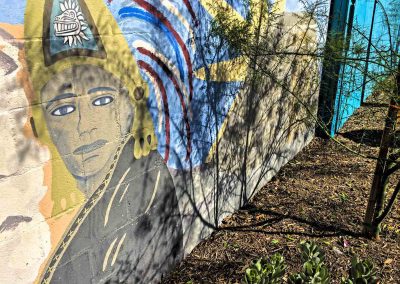 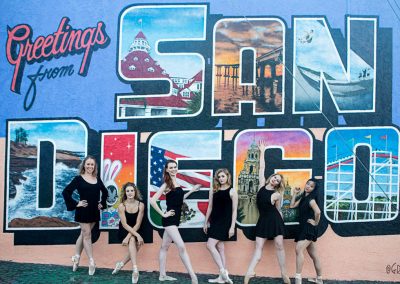