Considered to be the gateway of San Francisco, the Presidio makes for a stay centrally located to downtown San Francisco.

As San Francisco re-emerges from lockdown with the rest of California, an easy getaway is to The Presidio in San Francisco. Perched on the northern tip of the San Francisco Peninsula, the Presidio overlooks the striking Golden Gate Bridge, the sparkling San Francisco Bay and the glittering city skyline.

Considered to be the gateway of San Francisco, the Presidio makes for a stay centrally located to downtown San Francisco, combined with a dive into history and the opportunity to explore endless amounts of the vast outdoor space.

Dating back to 1776, the spot was once a fortified village under the Spanish flag and passed to Mexico in 1821. From there, it was occupied by the US Army in 1847 and considered the most important Army Post on the Pacific Coast.

The Lodge at the Presidio was once the iconic Montgomery Street Barracks built between 1895-1897 by US Army enlisted men. Labelled “Infantry Row,” it housed six artillery companies, a cavalry troop and two infantry companies. The large central lawn out front was the main parade ground and site for many other activities of the army.

Re-envisioned from colonial revival style barracks into a hotel by the architecture firm Architectural Resources Group (ARG), builder Plant Construction, and overseen by the Presidio Trust, the Lodge at the Presidio emerged after three years of meticulous work and restoration observing the highest environmental standards into a 42-key, 3-storied luxury boutique hotel in 2018. It is the sister property to the award-winning 26-room retreat, the Inn at the Presidio, which opened in 2012.

Paying homage to its rich history, Laura Cook of San Francisco-based LC Interiors used artisan details and memorabilia sprinkled throughout the property’s contemporary furnishings and finishes in a “transitional” combination of traditional and modern styles, in classic tones of blue, black, white, grey and pops of red. A ghost pattern of the walls of the former company office and arms storage room was created in darker wooden inlay on the floor to indicate the original floor plan.

The welcoming teak rocking chairs on the front porch lead guests into a friendly lobby reception area divided into four seating areas for socializing, eating or working. Reflecting the history of the building, rich materials such as leather, dark woods, antique brass and iron were utilized.

The rooms are spacious and well-appointed, with tent-inspired canvas headboards, a modern reference to the military past. The bed bench is representative of a military cot with woven leather and metal legs, while ottomans are covered in canvas and denim strapping to resemble army duffel bags. The majority of the rooms have views.

The art has been curated by Julie Coyle Art Associates and is inclusive of photographs and artifacts that were from the time including a lobby collage “A Soldier’s Story” is an assemblage of items that a soldier may have collected such as matchbooks, postcards, and a torn playing card, referencing the tradition of tearing the last hand of cards when shipping out for service in the hope of returning one day.

Other social areas include a courtyard garden with fire pit, and a large dining room lounge with a fireplace.

Included in the stay is a continental breakfast and a wine and cheese platter from 5-7pm that can be ordered for delivery to your room, or enjoyed in an area on the ground level or outside by the firepit.

Since 1994, the public has relished the beauty and spaciousness of the 1,491-acre national park and a National Historic Landmark District surrounding the Lodge, welcoming millions of visitors each year. On its grounds, you can picnic on the lawn which was once the main parade ground of the army; hike any of its 24 miles of trails, cycle its 25 miles of bike trails, explore the forested areas, revel at the scenic overlooks and visit the Chrissy Field beach.

There are many historic buildings. One houses the Walt Disney Family Museum; another is one of the oldest buildings in San Francisco, the Officers’ Club, with some original Adobe walls dating back to the Spanish Presidio of the 1790s incorporated into the front wings of the building when it was rebuilt by the army around 1847.

There are homes that were once the living quarters of generals and other officers. These homes have been renovated to house 3,500 residents. There are eateries and businesses employing 4,000 people at the public, private and non-profit organizations all of which support the park, including the former Lucasfilm office with its Yoda Fountain.

There are two cemeteries – the San Francisco National Cemetary,
which is encased by tall eucalyptus trees and slopes down a hill framing a view of the Golden Gate Bridge. On the property is another endearing cemetery surrounded by a white picket fence created just for the loyal pets of those families stationed at the Presidio.

Anticipated to open in 2022 will be the Tunnel Tops, a 20-acre new public parkland that will connect the Crissy Field waterfront to the heart of the Presidio. 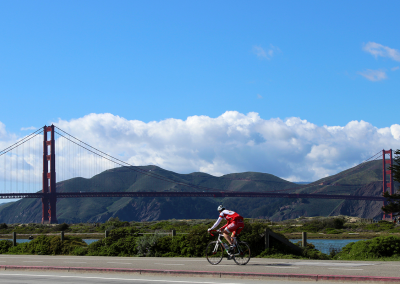 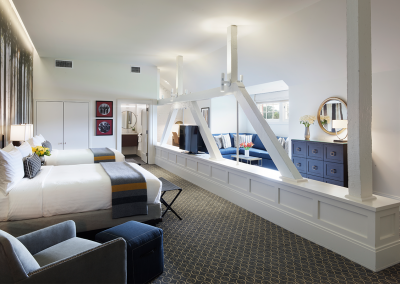 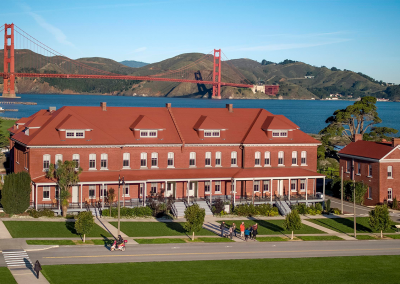 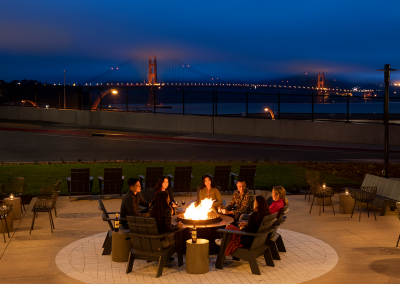 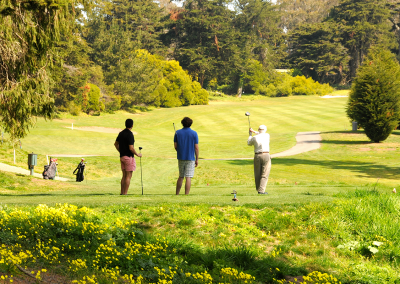 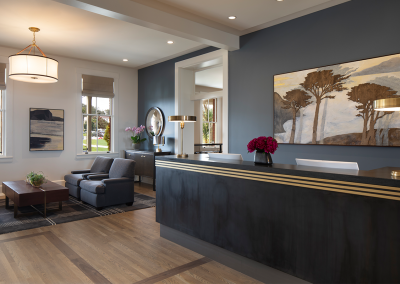