Sometimes you begin a journey, unclear of the final destination. You take the first steps and let destiny unfold.

Back in 1921, when Simon Rodia purchased a little cottage in Los Angeles with a triangular-shaped backyard and began “decorating”, he couldn’t have known that he would be creating an historic piece of work, which over the next 30-plus years would become the Watts Towers of Simon Rodia, 17 massive sculptures constructed of structural steel and covered with mortar.

“I don’t think he had building a monument in mind when he started. It grew organically and built upon itself. We only have vague information, some photos that give us a look at the early stages. He likely began by decorating his house, then began creating a tower, then another tower, and another, connecting them. At some point, he raised a tower and there was a tower within a tower,” surmises Jeffrey Herr, the Historic Site Curator for the City of Los Angeles’ Department of Cultural Affairs.

“Rodia was a tile setter by trade, but he spent weekends and hours after work, building the towers almost nonstop for years. He was also a preacher, and very unique,” says Herr.

Born in Ribottoli, Italy, Herr suspects the Los Angeles landmark Rodia built, which he called, Nuestro Pueblo (our town), could have been influenced in part but what he saw as a boy attending village folk festivals. “Men carried 40 foot structures in parades. Think of statutes like the Virgin Mary effigies, but 10 times bigger, it has some parallels to what he did with the towers,” says Herr.

What was it that brought Rodia all the way from Italy to America? His brother immigrated here in 1895 and lived in Pennsylvania. Rodia followed not long after and later made his way to the west coast to work in construction. Herr isn’t sure when exactly he started building the towers, but bit by bit it all came together. What’s remarkable is that Rodia, alone, built them. There was no crew. He also didn’t have any investors plucking down big bucks for materials. He had no fancy equipment or machinery. “This is about a man’s ingenuity. He accomplished an engineering feet, with hammer, chisel, pliers, simple tools,” says Herr. He dressed the towers in broken glass, sea shells, tiles, ceramics, whatever was handy. “While it looks like he gathered broken things, he also would take whole things and break them. It was purposeful and good and repurposing found objects,” says Herr.

To give you a sense of how huge his towers are, one of them is nearly 100 feet and contains the longest slender reinforced concrete column in the world. The monument also features a gazebo with a circular bench, three bird baths, a center column and a spire reaching a height of 38 feet. Rodia’s “ship of Marco Polo” has a spire of 28 feet, and the 140-foot long “south wall” is decorated extensively with tiles, sea shells, pottery, glass and hand-drawn designs.

The only way he could work on the towers, says Herr, was to climb. He had built-in ladders in the towers. He carried up heavy materials and wet concrete. By his early 70s, the physicality of the task was no longer sustainable. “When he could no longer continue, he deeded his property to a neighbor and joined his sister in Martinez. I don’t believe he was finished,” says Herr.

Who knows what else he might have done? The Watts Towers, listed on the National Register of Historic Places, are a National Historic Landmark, and a State of California Historic Park and Historic-Cultural Monument No. 15, as designated by the City of Los Angeles Cultural Heritage Commission.

The first couple of decades the Watts Towers, however, didn’t get much attention outside of the neighborhood. It was in an industrial area, close to the railroad tracks. The spotlight didn’t come until the 50s and early 60s. Herr says there was a major controversy over the towers because of their size and potential safety hazard, especially in the event of an earthquake. A fire destroyed his house after he left, in 1956. The Department of Building and Safety wanted the property destroyed. Bill Cartwright and Nick King bought the towers from Rodia’s neighbor for $3,000 and they founded the Committee for Simon Rodia’s Towers in Watts. They recognized the worth of towers and fought to save them by getting signatures and money and saw to it that an engineering test was conducted in 1959 that would prove the towers were structurally sound. “The deal was that if a stress test was done and the tallest tower couldn’t be pulled down the city would rescind its demolition order. The monument was rescued,” says Herr.

The 60s would usher in a new era for the towers. “They were a focus point for arts and culture in Watts. They were an impetus for creating a cultural arts center three. In the 60s Watts was on the cutting edge of the music scene. The towers were a beacon of individuality, which meant a lot to a community that was underserved. The towers were a foundation for African American artists looking for a springboard for their work. Rodia was a spiritual icon for their work. He gave them a foothold,” says Herr. “What may be less recognized is how integral the arts center that still exists today, is to the significance of the towers. His little house that burned downed was where the art center was first. It started outdoors.”

The Watts Towers Arts Center is a tremendous cultural resource, with galleries, contemporary and historical art, educational programming, the annual Simon Rodia Watts Tower Jazz Festival, Watts Towers Day of the Drum Festival and much more.
The Towers were deeded to the State in 1978 and are a tourist attraction. They were one of the locations in the Oscar winning movie La La Land.
Rodia is quoted as saying, “I had in mind to do something big and I did it.” He certainly did. Says Herr, “It’s amazing that he had the ability to focus so intently on one things for so many years. He proves you can do anything – amazing things, if you believe in yourself.” 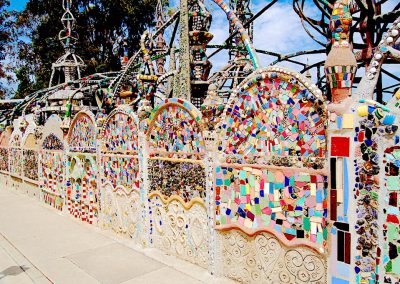 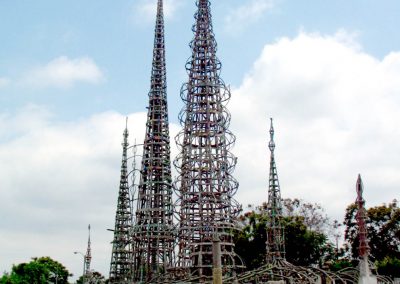 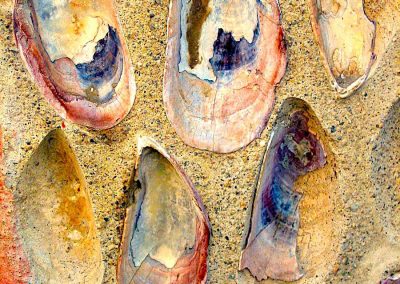 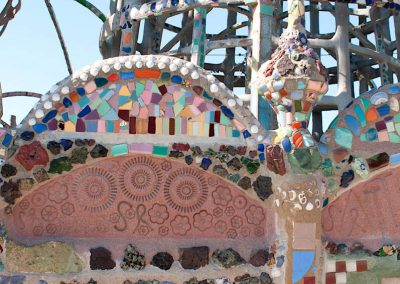 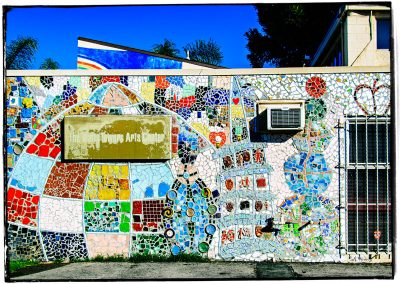 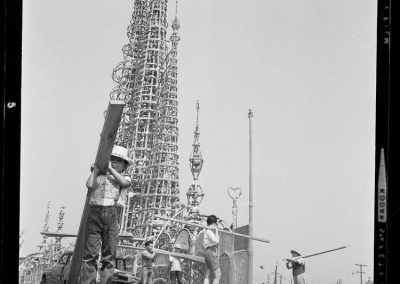 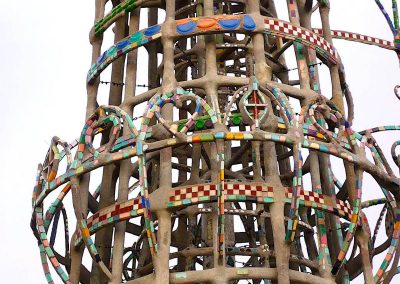 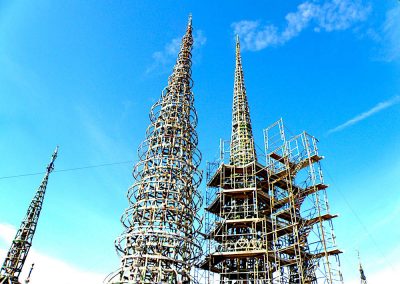